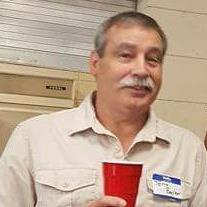 Terry Lynn Barber, 58, of Dyess, Arkansas departed this life on Friday, July 28, 2017 at his home. He was born on September 3, 1958 to Robert Jefferson and Gladys Dorothy Scott Barber. He was a faithful member of The Lighthouse Assembly of God, he graduated from Rivercrest High School in 1976 and has been employed with Gilster Mary Lee for 39 years.
He is preceded in death by his parents and three brothers: Bruce Wayne Barber, Allen McCullar and Robert Lee "Butch" Barber.
Mr. Barber is survived by his wife of 37 years: Virginia "Jenny" Barber of the home, a son: Raymond Jones of Dyess, Arkansas, a daughter: Kelly Barber of Dyess, Arkansas, three brothers: Loyd Barber (Judy) of Gosnell, Arkansas, Don Barber (Gail) of Lepanto, Arkansas and Leo Barber (Barbara) of Tyronza, Arkansas, four sisters: Norma Turman of Salem, Arkansas, Sharon Wilkey of Salem, Arkansas, Carolyn Wells of Texarkana, Texas and Connie Nichols of Tyronza, Arkansas and two grandchildren: Austin Barber and Chelsea Barber.
Visitation will be held Sunday from 5:00 to 7:00 at Murphy Funeral Home in Lepanto, Arkansas.
Funeral Service will be held Monday at 10:00am at The Lighthouse Assembly of God in Dyess, Arkansas.
Interment will follow at Dyess Cemetery in Dyess, Arkansas.

The Lighthouse Assembly of God

To order memorial trees or send flowers to the family in memory of Terry Barber, please visit our flower store.