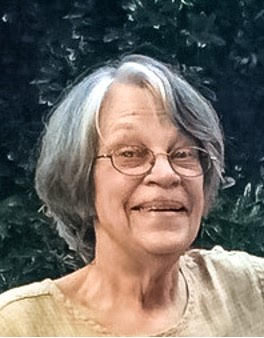 “How lucky I am to have something that makes saying goodbye so hard.”

Marsha Rhea Fair was born January 1, just an hour & 46 minutes into 1946, at Nobles Memorial Hospital in Paris, Tennessee, where her Mother Jeanne Bradsher Fair worked as a nurse while her Father War Hero B-17 Pilot Captain Albert L. Fair, Jr. finished duty in the Army Air Corps nearby.  Marsha Rhea was delivered by her namesake, Dr. W. G. Rhea, beloved Paris physician for whom her Mother worked.

Marsha Rhea slipped away from her earthly life without warning or fanfare, on November 8, 2021, at the end of a short stay at a Jonesboro hospital. She had courageously battled debilitating physical conditions since February.  Marsha Rhea Fair died peacefully two months from her 76th birthday.  Already she is deeply missed by family and friends.

Marsha was a native of Marked Tree, Arkansas, where she grew up on her family farm in a picture postcard setting surrounded by family, friends and showered with love.  Throughout her life, Marsha loved entertaining groups of friends with good food and lively conversation.  This love of entertaining friends began on that farm in Arkansas, and she and her entourage enjoyed riding the numerous horses always on hand as part of her diverse and lively farm family.  Industrious father Albert Fair, a farmer, converted a long, tool truck into a roomy vehicle for hauling horses, and most summer Saturdays, the entire family loaded the horses and filled the car with folding chairs, fried chicken and coffee for the grown ups, and struck out for wonderous adventures at horse shows and parades in nearby communities.  These were exciting times where Marsha & sister Pam wore fringed outfits and rode in competitive events, but mostly it was a weekend overflowing with fun day and night for the family and friends.

Marsha’s life growing up was characterized by such family activites, with family friends with children the same ages.  Never in their young lives were Marsha and Pam left with babysitters, as the family did things the whole family and family friends enjoyed, such as exciting trips to Memphis to visit father Albert’s sister Eva Mae and family for picnics on the grass at Overton Park and the Memphis Zoo.  There was no shortage of homemade treats, love and doting on the first grandchild Marsha by the grandparents next door and those in nearby Tyronza.

In Jr. High School Marsha became interested in basketball, was good at it and became integral to the Marked Tree High School girls’ basketball team, until a knee injury ended that.  But there were many other activities she enjoyed at school and in the Methodist Youth Fellowship of the First Methodist Church in Marked Tree, where her family had been members for generations through maternal grandparents Fred and Laura Bradsher and Aunt and Uncle Annie and Ernest Burton and more.  The Burton Home in Marked Tree was a “second home” for the Fair sisters, and they ate lunch there daily a block from school.  They also enjoyed sumptuous holiday meals at the Burtons, where they spent happy times with cousins Ann Burton, Clay and Ernest Portis and Aunt Evelyn and Uncle J. C. Portis.  Visits to their father’s parents Albert and Eva Fair in Tyronza were also commonplace.  Sleepovers with nearby Maternal Grandmother Laura Bradsher Hurt were frequent and special.

Marsha and her sister both graduated from Hendrix College in Conway, Arkansas, their Mother’s Alma Mater.  Interest in languages started with high school French by Barbara Key and a European trip organized by the school to France and neighboring countries one summer in the early 1960s.  But it was at Hendrix that Marsha’s keen interest in languages flourished, and languages would be a key factor throughout Marsha’s entire career.  At Hendrix, Marsha was taught and guided in her studies and in life by Madame Georgette Caskie, who also taught young Jacqueline Bouvier Kennedy.  The study of languages introduced Marsha to worlds and cultures that most only dream of.  Marsha excelled in her study of languages, primarily French, at Hendrix, and won all language awards Hendrix offered.  After graduation, it was on to graduate school in Columbia, Missouri and a Master’s Degree in French literature.  She later augmented her education with a Marketing Degree during the joyous years she lived and worked in Little Rock, a time marked by memories of happy times with close friends, block parties near her home on Oak Street and trips home to Marked Tree to be with loved ones.

Marsha’s career began in Little Rock working with developmentally challenged children at the Child Study Center, University of Arkansas at Little Rock.  She later taught English as a second language in settings at home and abroad, including teaching English through federal government programs to refugees from Vietnam and Cuba relocated to Arkansas.  She also taught English as a second language in Europe during travels with her Hendrix College roommate and close friend for life Amy Edgington, and in the Yucatan region of Mexico, where she lived and worked.

Marsha’s gift for languages took on a very personal meaning for her when she went to work for the U. S. Rice Council and combined her knowledge of languages with her lifelong interest in farming.  She straddled several worlds which afforded her an enlarged worldview to life.  She had a definite and pronounced “joie de vivre.”  She loved to laugh, entertain and cook for friends, and always enjoyed lively conversations, making it challenging but joyous to be in her company--unless you told her she was wrong about something she knew to be true.  She did not suffer fools well.  She also had keen insight into human nature.  And she had a lifelong passion for reading and learning.  All these characteristics served her well in her work promoting US Rice in Latin America.  The work was a challenge in itself as the markets for US rice were not evenly matched, but Marsha’s love of languages and studies of marketing made her the perfect fit for her position marketing US rice abroad.  Her territory originally was the Western Hemisphere.

Marsha had a long and meaningful marketing career with the United States Rice Industry.  Starting with the USA Rice Council, a Houston-based rice growers association, she helped develop new markets to export rice grown in the US—much of it grown in her native Arkansas.  Most notably, Marsha worked on developing the Latin American markets of Mexico and Central America.  She traveled extensively and often to countries such as Costa Rico, Guatemala, Honduras, Nicaragua, Mexico and Columbia.

Marsha was at ease with everyone on her travels, from the heads of government agencies she visited to the humblest of farmers seeking simply to improve their growing techniques.  She hosted and acted as “tour guide” for groups of rice farmers and potential buyers who came often to NE Arkansas to see US rice operations in the Poinsett County area, sometimes also driving a van of chattering foreigners blasting her with one question after another as she shuttled the fascinated rice industry visitors from Little Rock to Stuttgart, then on to Weiner and Jonesboro, normally ending up in Memphis for a great meal and an evening of fellowship and learning, all the time speaking the language of the visitors, mostly Spanish but sometime Portuguese or regional dialects, answering complex technical questions, as well as joking with the groups and their hearty laughter and cajoling.  She traveled on official rice marketing business to Cuba more than once, and if he had not been traveling at those times, she most likely would have been granted an audience with Cuban President Fidel Castro, instead of his brother Raoul Castro, who received Marsha graciously.

After leaving what later became the USA Rice Federation, Marsha continued her work in Latin America as a consultant with the US Rice Producers Association.  She was thrilled to spend her last years working from home at her family farm near Marked Tree.  It was not uncommon for her to be mowing the grass at home one day and to be on a plane to Columbia the next day for rice business, where she was protected in her travels by gun-toting guards or servicemen from the United States Embassies.  But she took it all in stride as just another necessary aspect of her working environment.

Jim Willis, President of International Programs for the US Rice Council and its later incarnations, upon learning of Marsha’s passing stated:

“There’s no way of measuring the impact Marsha had on increasing the demand for rice and therefore US farm prices through the introduction of US rice in school lunch programs in Latin America.”

“Marsha was a key to building our largest markets for U.S. rice in Latin America.  It wasn’t just her aptitude for speaking Spanish; it was her attitude.  She was so empathetic that she became a big hit with all, including rice marketers, promoters, teachers and students.”  Mr. Willis continued, “The rice industry needs to erect a memorial to Marsha for what she did to build the largest market for U.S. long grain rice in Latin America.  I hurt for not getting to see her one more time.”

Marsha was preceded in death by her parents Albert and Jeanne Fair of Marked Tree, Arkansas and an infant brother Fred.  She is survived by sister Pamela Jeanne Fair, a former attorney and air traffic controller who retired alongside Marsha to the family farm in Marked Tree.  She is also survived by numerous close maternal cousins Wesley Portis of West Memphis, Clayton Portis Allen, Lee Allen and children Ellie, Wesley Gray and Leeland Allen of Dallas, Texas, Bradsher, Robin and Caroline Portis of West Memphis, Diana Wallin Portis of West Memphis, Sharon Heeb of Harrisburg, fraternal cousins from Memphis, in Alabama, Little Rock and Heber Springs, and a large and varied group of close friends from childhood, college and the world over, especially in Little Rock, Houston, New York state and Portland.  Marsha was a lifelong Democrat and had a keen interest in politics forever.  She was also a lifelong member of the First United Methodist Church, 308 Frisco Street, Marked Tree, Arkansas 72365, where memorials in her honor may be made.  The family gratefully thanks the wonderful home health care workers who made her life richer this past year, especially John Stepp of Marked Tree.  Thanks also to Delancey-Murphy Funeral Home of Marked Tree, Arkansas.

A festive celebration of Marsha’s extraordinary life will be held at a later date, most likely in the spring at her family farm in NE Arkansas.

“And when great souls die, after a period peace blooms, slowly and always irregularly.  Spaces fill with a kind of soothing electric vibration.  Our senses, restored, never to be the same, whisper to us.  They existed.  We can be.  Be and be better.  For they existed.”  Maya Angelou

To order memorial trees or send flowers to the family in memory of Marsha Fair, please visit our flower store.