Dennis Couey, 54, of Harrisburg, Arkansas passed from this life on Thursday March 10, 2016. He was born on March 1, 1962 to Paul and Barbara Herman Couey. He was of the Baptist faith and he loved spending time with his family especially his grandson, Lance.
Mr. Couey is preceded in death by his father: Paul Couey and 2 Brothers: Paul Couey and Grover Couey.
Dennis is survived by his daughter: Tamera Couey of Osceola, Arkansas, Mother: Barbara Couey of Harrisburg, Arkansas and grandson: Lance Bruce.
Visitation will be held Sunday from 4 to 6 at Murphy Funeral Home in Lepanto, Arkansas.4 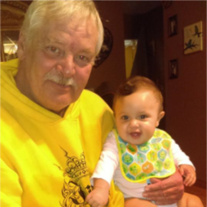